Jinja, Uganda– Today our group visited the Jinja Progressive Secondary School, founded  in 2003 by Hajj Kitezala Swaibu, a Moslem.  We arrived after an early morning rain that cleared the air and wetted down the dust.  Although a private school that admits students of all faiths, the school has a definite Moslem influence as evidenced by the many girls who wore scarves that covered their heads.  The school also had a mosque, that while still under construction, served as a place for prayer for the Moslem students. 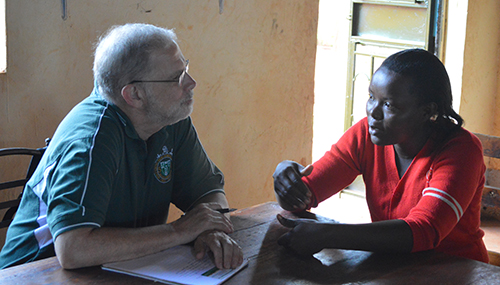 The Executive Director, as well as the entire staff, were very proud of their students who score consistently high on the government exams – an important factor that adds to the prestige of the school.  After  a tour of the school facilities by the principal, the morning session afforded many of us an opportunity  to talk to many of the faculty and students.

During my visit, I was impressed by the teachers’ pride in their school, along with the seriousness the students demonstrated toward their studies, which compared to American standards, are very rigorous. At this school, along with the other schools we visited, we were warmly greeted and found that both teachers and students were very interested in what we do in our schools in the United States. As in the other schools that we visited,  they were amazed and surprised that we share many similar challenges, and that all is not perfect in our country.

With the exchange of e-mails, it was both our hopes and expectations that our visit would continue in the coming months  so that we can continue to better understand and appreciate each other and the work in education that is the thread that binds us together.