Kampala, Uganda–While we were in Kampala, our group visited the Ugandan Women Writers Association, FEMWRITE. The group was able to sit down for more than an hour with the staff there, and to have a broad-ranging and informative discussion that touched on the ideas, among others, of feminism in Uganda and the United States, international human rights questions that affect women, marriage, the idea of beauty and identity, the importance of fostering the voices of women writers, and the role of Ugandan women’s literature in the Ugandan curriculum. I have provided a transcript below of part of the conversation: 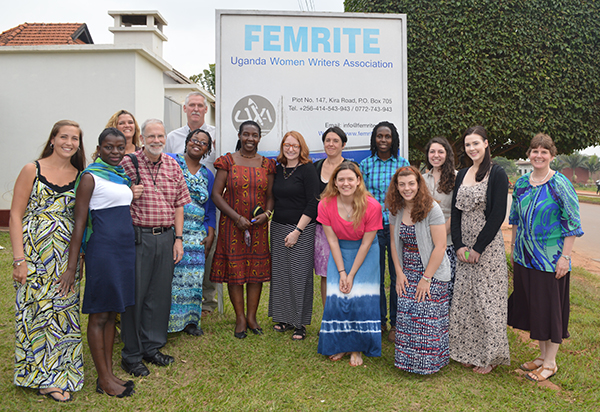 Noreen O’Connor: How does FEMWRITE get involved with Ugandan education?

Hilda Twongyeirwe: We get into the education sector. We take projects there although we are not programmed with the Ministry of Education. But we seek our space there in the education sector and seek to have our books in schools. We have been trying to have our books on the national syllabus, but so far we have not managed. But we are still trying.

Megan Borsuk: What is the process you have to go through to get yourself onto the national syllabus?

Hilda Twongyeirwe: We used to talk with the Department of Education Directorate. We worked a lot with them, but that is not there anymore, so now we try and speak to the National Curriculum Development Center. For a long time, the choosing of books on the syllabus was a silent affair until FEMWRITE’s voice became stronger. So last year for the first time they called on the public. In the press, they called on the public to submit books. It was a pleasant surprise when the chairperson of the publisher’s association called FEMWRITE the day when the advert appeared and said we should thank you people because it is your noise that has got the National Curriculum Development Center to call for submissions.

Noreen O’Connor: We have only been here a few days but when we have asked students and administrators about the curriculum here in Uganda and one thing we found is that when English is taught the curriculum focuses mainly on grammar and writing, and not literature. Is that what you find too?

Hilda Twongyeirwe: That is true. Literature study is mainly on Senior level. The way it is established properly in the curriculum, literature study begins at Senior 3.

Noreen O’Connor: How much literature do you read in school that is written by Ugandan writers and how much do you read that is from British writers or other writers in English from other places?

Juliet Kushaba: When you look at the curriculum itself, most of the schools will have compulsory literature from Senior 3 to Senior 4. They will have a syllabus that will maybe do some poetry from Uganda, but the rest of the books, novels, plays you will find that they are mainly reading from wherever but not from in Uganda really. And then at A-level, mainly, it’s poetry from Uganda, and some few plays from Uganda, and then it’s the rest of the world. So if you were going to quantify that in terms of percentage, you will find that our students read less than ten percent of Ugandan works and 90 percent from the rest of the world’s literature.

Hilda Twongyeirwe: And it is not structured, so this year you will find that there is no book from Uganda. So it depends on the person selecting. If they decide not to have Uganda, it won’t be there. So one of the things that we have been trying to do in our activities is asking that there is a section from Ugandan literature. That way you know it is going to be there. But now, they will put one book and it is put alongside books from elsewhere, so again it will depend on the teacher which book he’ll pick.

Juliet Kushaba: And it is very likely that the teachers will pick books that are from elsewhere because they have been taught before, and so there are notes for the same books. Instead of teaching this new book that they have read and make notes for themselves, they always teach what they have notes for which makes their work much easier.

Noreen O’Connor: That is very true in America too. Even to get more women’s literature into the curriculum or more world literature, African literature, for Americans to read. It is hard. If we don’t get educated in that when we go out to teach we teach the same thing that we learned so how do you get people to make the changes in the curriculum? But you said you do work in the schools. What do you do?

Hilda Twongyeirwe: We call them writing clinics. It depends upon the amount of time they give us; because that is another issue. The schools look at what students need to prepare for exams, so we get little time. But what we do when we get there, they learn to write, to write short stories and poetry. That’s what we do, teaching them to write. But in so doing, one of the other strategies is to introduce our books there. We donate books and then we ask the schools to buy some.

A final note: the group members purchased many books from FEMWRITE for their personal collections and to include in their curricular projects. In addition the Fulbright-Hays grant for this project includes funding to purchase books for the schools we will visit, so we purchased a number of books—including The African Saga, The Butterfly Dance, and A Woman’s Voice to distribute to the schools we will visit in the next few weeks.